How a Russian central banker and suspected mob boss infiltrated the NRA and helped get Donald Trump elected.

Nashville native G. Kline Preston IV is proud to be a Russophile. A framed poster of Vladimir Putin hangs on his office wall overlooking a porcelain bust of the Russian president. The 61-year-old attorney runs a US-Russo law firm specializing in a unique mix of Russian legal interests including adoptions, trade deals and investments including Ukrainian vodka. His Twitter feed is filled with pro-Kremlin news links and photos of his visits to St. Petersburg and Moscow.

“We’re very similar people,” Preston says. “You could take many Russians and put them in a room with people from Nashville and everybody kind of looks the same,” says Preston who likes confederate, gun rights and anti-lgbt causes with almost as much passion as he does Russia’s national interests.

In 2009, Preston was invited to Moscow by Kremlin insider Senator Alexander Torshin to brief a group of Russian legislators on the American legal practice of immunity or “plea bargaining”.  Preston’s briefing came amidst a series of mob-related executions of senior gangsters and attorneys trying to prosecute them in Russia but it’s unclear if the briefing was related.

Alexander Torshin has since climbed the ranks in the Kremlin and is now the Deputy Governor of Russia’s Central Bank and, according to Spanish prosecutors, the “godfather” of the same mob involved in those 2009 killings.

Spanish police have been hunting Torshin since 2013 on charges of money laundering but he’s repeatedly escaped capture. The crime organization he allegedly heads is suspected of racketeering, fraud, bank scams, extortion and contract killings, according to Spanish newspaper El Pais.

In 2011, Preston introduced Torshin to David Keene, then President of the National Rifle Association, according to the Washington Post. The Russian banker has since become a life-long member of of the NRA and regularly attends its meetings. Torshin and a mysterious American-based operative Maria Butina also formed a Russian “NRA”  called “The Right to Bear Arms”.

“Is it possible that these are just well-meaning people who are reaching out to Americans with shared interests? It is possible,” says Steven L. Hall, who retired from the CIA in 2015 after managing Russia operations for 30 years. “Is it likely? I don’t think it’s likely at all. . . . My assessment is that it’s definitely part of something bigger.”

Torshin and Butina grew their influence within the NRA between 2011 and 2016, met with Donald Trump and his family and hosted an NRA delegation to the Kremlin.

Torshin and Butina joined G. Kline Preston at the NRA convention in Nashville in 2015. “The NRA is one of the most world famous and most important organizations” Butina told conservative publication Townhall. “We would like to be friends with NRA.”

At the meeting, she also advocated for the dropping of U.S. sanctions which have adversely affected Russia’s gun manufacturing sector.

The star attraction of the 2015 NRA Convention was Donald Trump. On the sidelines of that meeting, G. Kline Preston met Trump, even posting a photo and an accompanying Russian tweet in Cyrillic. Torshin later also told Bloomberg he “had a friendly exchange” with Trump at the convention. 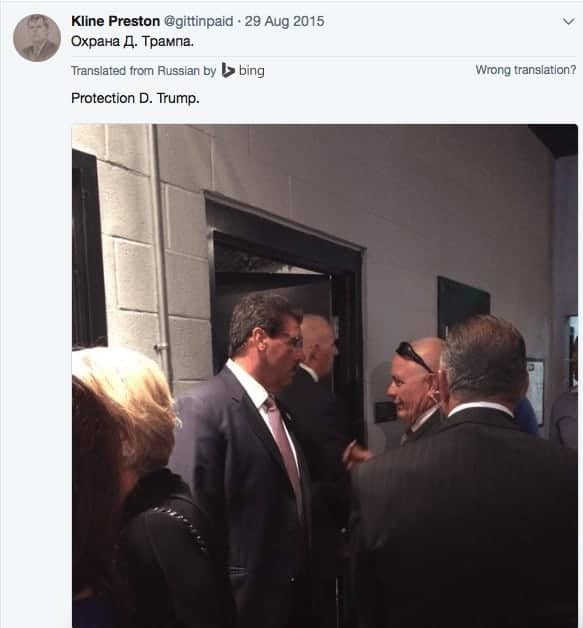 Three months later, Torshin and Butina invited a delegation from the NRA to Moscow, where the NRA leadership met powerful Putin Deputy PM, Dmitry Rogozin, who is a target of U.S. sanctions. “Rogozin is chairman of the Russian Shooting Federation and his Board hosted a tour of Federation HQ for us while we were there,” Keene told the Daily Beast. “It was non-political,” Keene said.

The NRA delegation also met Russia’s Foreign Minister Sergey Lavrov and that meeting definitely was political, according to at least one delegate. “[We] met earlier with Russian Foreign Minister who spoke on Mid East (sic),” ‘Sheriff’ David A Clarke tweeted. Clarke was until last week under consideration for Trump’s Homeland Security Secretary before his  appointment was stopped by White House Chief of Staff John Kelly. 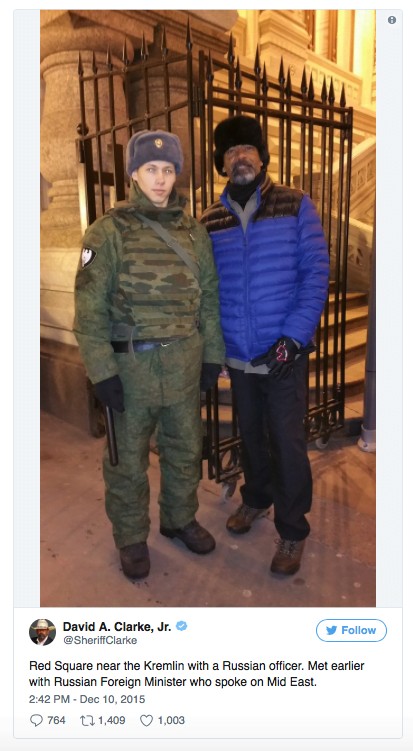 In February 2016, Butina and a well known Republican with deep ties to the NRA, Paul Erickson, started a business in South Dakota, called “Bridges, LLC”. Erickson advised Mitt Romney and Pat Buchanan in the past and more recently bragged he was advising Donald Trump.  It’s unclear what the purpose of “Bridges LLC” is but its founding in the midst of unprecedented high level contacts between the NRA and Kremlin officials bears scrutiny.  Butina had previously hosted Erickson at the a Russian “Right To Bear Arms” conference in Moscow in 2014.

Butina’s boss Torshin returned to the 2016 NRA convention in Louisville, Kentucky in May.  Donald Trump was back to give the the keynote address but this time as a GOP candidate for President. Trump picked up an endorsement from the NRA and with it, $30 million in support from the the NRA’s Political Action Committee. Trump briefly shook hands with Torshin who also had a one-on-one dinner with Donald Trump, Jr. at a Louisville restaurant where he was seated next to him.

As the political Summer progressed, Maria Butina began inserting herself into U.S. politics. At FreedomFest in Las Vegas, she asked Trump about his policy on Russia, for the first time as a candidate.

“What will be your foreign politics, especially in the relations with my country?”

“I know Putin and I’ll tell you what, we get along with Putin,” he said.

After the election, Butina and Torshin began expanding their Washington profile, until his mob ties were discovered.

A week after President Donald Trump was elected, Butina held a costume-themed birthday party at Cafe Deluxe near American University, where she attends graduate school classes.  According to those in attendance, she repeated an oft-repeated claim she was “part of the Trump campaign’s communications with Russia,” according to the Daily Beast. Also in attendance Butina’s business partner in “Bridges LLC”, Paul Erickson. She was dressed as the Russian Empress Alexandra while Erickson was dressed as Rasputin.

On February 2, Alexander Torshin flew to Washington D.C. for a meeting with President Trump at The White House. The meeting was abruptly cancelled the night before when a national security aide discovered Torshin was wanted by Spanish Police as a “godfather of an organized crime and money-laundering ring,” reported Yahoo!’s Chief Investigative Correspondent Michael Isikoff, citing an administration official and four other sources familiar with the event. The abrupt cancellation came at the same time as increased scrutiny over former National Security Adviser Michael Flynn’s connections to the Kremlin.

NRA spent $35 million more in 2016 than 2012, amid questions over its accounting practices and donor sources.

The NRA and its lobbying arm and Super PAC spent $54 million on the 2016 election cycle, $30 million for Trump’s campaign alone. That’s double what was spent in in 2014, and $35 million more than in the 2012 cycle. The NRA also funds many top Republicans in congress like House Speaker Paul Ryan (R-Wis) and Senator Ted Cruz (R-Tex). 98% of the NRA political spending goes to Republican coffers.

Federal law prohibits an organization like the NRA from soliciting money for itself and then redirecting that money to its PAC. An investigation by Yahoo! News in 2015 discovered the NRA was doing just that, making it impossible to accurately trace donors, as required by the FEC and IRS regulations.

“I simply cannot see how this is legal,” Larry Noble, senior counsel at the Campaign Legal Center, told the Guardian. “It is impossible to see how they are soliciting funds the way they’re soliciting, and putting those funds in their political action committee, without violating the law.”

Could the combination of a central banker and suspected mobster, an attorney from Tennessee, a Republican from South Dakota, a Sheriff from Wisconsin and a mysterious Russian gun advocate – all with ties to the Donald Trump and his son Jr – have worked together to bring money into the NRA in order to help fund and win an election? The enormous increase in political donations from the NRA may come under scrutiny as multiple investigations probe collusion between Russia and the Trump Campaign.

6 thoughts on “For Guns And Country”

View all posts by Zev Shalev and Tracie McElroy