Opinion. There is something wrong with the Attorney General.  At best, he has selective amnesia. At worst, he helped a foreign government seize control over the executive branch of the US. In either case, he is unfit to serve. If the latter is true, not even the 10,000 lawyers at the DOJ can save Jeff Sessions from his great fall.

The AG feigns indignation about scurrilous rumors and innuendo he claims hurt his reputation. Mr. Sessions is far more concerned about himself than he is about the perilous state of the US democracy. The nation’s top law enforcement official says Russia meddled in the election and believes crimes were committed yet he can’t explain why he’s done absolutely nothing about it. This is a massive dereliction of duty.

Sessions says he recommended FBI Director James Comey be fired for his mishandling of the Clinton e-mail scandal. President Trump says it was for the “Russian thing.” The Attorney General would like us to believe Comey was a failure as FBI Director, but the real failure is Mr. Sessions. A failure to lead, a failure to uphold the constitution and a failure of conscience.

Sessions claims he met Russian ambassador Sergei Kislyak on Sept 8 at a routine meeting in his then capacity as member of the Senate Armed Services Committee. At first, the Attorney General denied he met Kislyak. Then he denied talking about sanctions. Now he denies he was acting on behalf of the Trump campaign when he discussed sanctions at the meeting with the Russian ambassador. Mr. Attorney General, your pants are on fire. 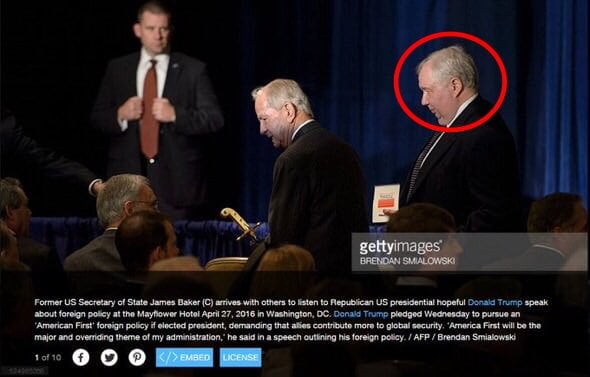 Sessions can’t recall yet another meeting with Kislyak at the Mayflower Hotel on April 27. Is he really expecting us to believe he was inches away from Kislyak, as pictured, but never discussed anything with the ambassador? It strains credulity that there was no conversation of substance at a speech in which then-candidate Trump proposed improving the US-Russia relationship.

The Attorney General’s testimony before the Senate Intelligence Committee was so ludicrous, it makes a mockery of the very word justice. His reluctance to answer questions, without a legal basis for his refusal, is a clear indication he is complicit in an ill-conceived and treachorous plot to steal the election on behalf of Vladimir Putin. Mr. Sessions must resign and face the consequences.

One thought on “Jeff Sessions Must Resign”