Sally Yates revealed much more than you’ve read at today’s Senate Judiciary Hearing. She revealed an attempt by President Trump to cover-up his administration’s ties to Russia. She may have lost her job for it, but she could save the Republic.

Sally Yates had no way of knowing it would be her last day on the job when she picked up the phone to call the White House counsel first thing on a cold and snowy last Monday morning in January.  The acting Attorney-General had promised WH Counsel Don McGhan she’d arrange for him to view the “problematic” evidence the FBI had on the National Security Adviser Michael Flynn’s connection to Russia. She had made those arrangements over the weekend and it was her first priority on Monday to finalize those plans.

McGhan didn’t return the call until much later that afternoon.  By 9 PM that Monday night, Yates had been fired, so we don’t know if McGhan ever followed up to view the evidence. In a press release that night, President Trump said she had “betrayed” the American people.

On the face of it, Yates’ betrayal was not related to the Flynn matter but her refusal to implement an unconstitutional executive order banning nationals from 7 mostly-Muslim countries from entering the US but the newly revealed Flynn timeline, may explain why she was given 2 minutes to vacate her job after learning about her dismissal via this aggressively worded press release. 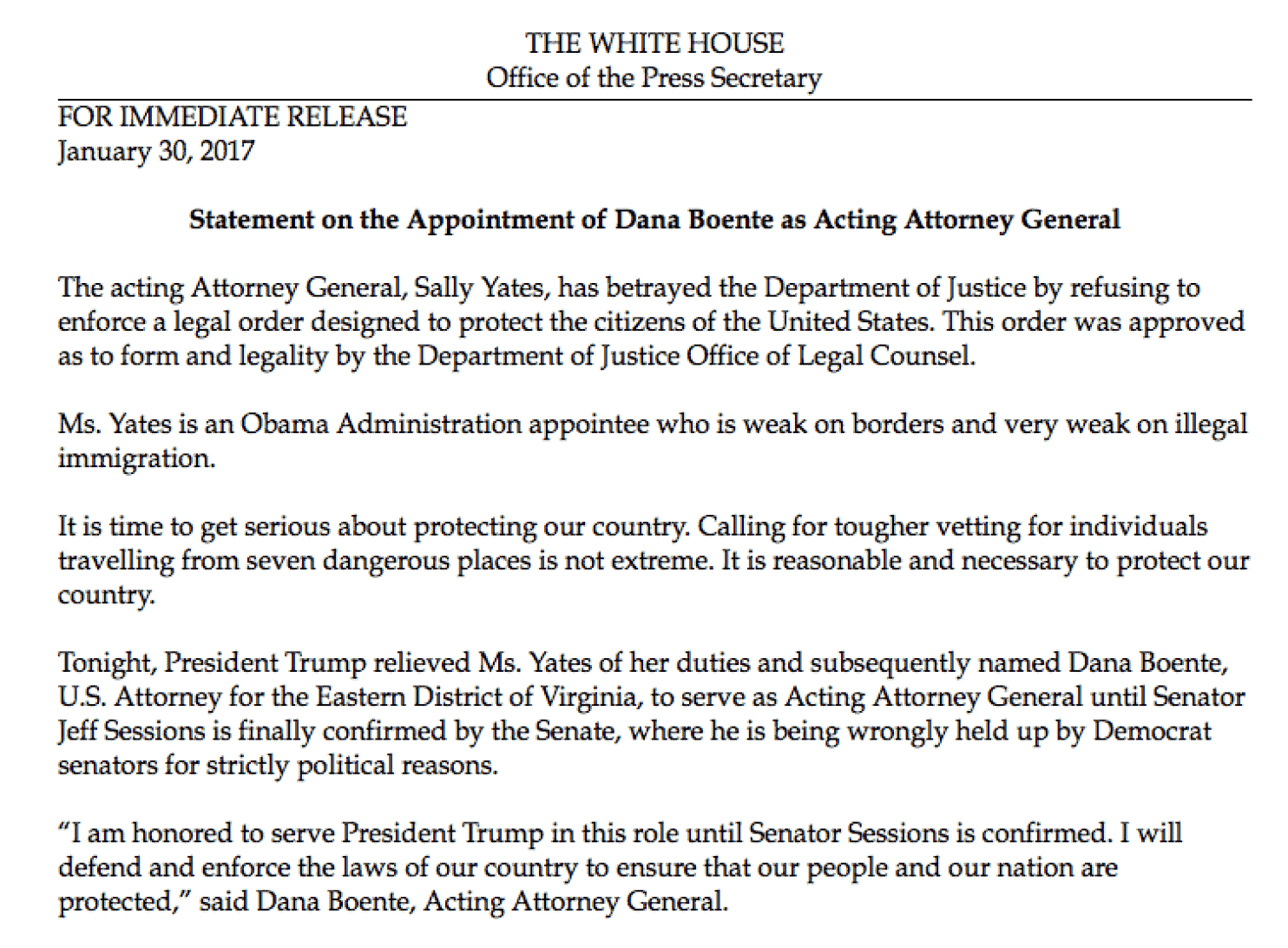 During the previous week,  Yates made two extraordinary visits on consecutive days to meet with McGhan at the White House. She had vital information to share: the National Security Adviser was not only lying to the Vice-President but was susceptible to blackmail by Russia. Appearing before a Senate Judiciary Committee today, Yates outlined the timeline and content of the meetings.

“The first meeting occurred on January 26, I called Don McGahn  and told him that I had a very sensitive matter that I needed to discuss with him, that I couldn’t talk about it on the phone and that I needed to come see him. And he agreed to meet with me later that afternoon.”

McGhan’s office was a “skiff” – intelligence parlance for a “Sensitive Compartmented Information Facility”. In that secure location, Yates could share confidential information about the “problematic” FBI investigation into Flynn. Yates says she went into a great amount of detail about Flynn’s potentially illegal activities and revealed Russia was in a position to blackmail Flynn because they were in possession of the identical information. “We believed Flynn was compromised by the Russians,” Yates says.

The Russians likely had the identical information because the FBI obtained it during surveillance of Russian Ambassador Sergei Kislyak.  The Washington Post would later report, Flynn was leaking sensitive information to Kislyak via phone and texts and illegally coordinating policy using this back channel to Russia’s most powerful envoy.  To make matters worse, Yates told McGhan, Flynn was lying to the Vice-President about it. She said action needed to be taken.

“We also told the White House Counsel that General Flynn had been interviewed by the FBI on January 24. Mr. McGahn asked me how he did and I declined to give him an answer to that. And we then walked through with Mr. McGahn essentially why we were telling them about this and the first thing we did was to explain to Mr. McGahn that the underlying conduct that General Flynn had engaged in was problematic in and of itself,” Yates revealed today.

The following afternoon, Yates went back to McGahn’s office at the White House to answer 4 key questions. McGahn wanted to know why the Justice Department would care if one White House official was lying to another, even if it’s the National Security Adviser and the Vice-President? McGhan also wanted to know about the applicability of criminal statute to Flynn’s actions. He also asked if the White House acted, would it interfere with a current investigation and he requested to look at the underlying evidence. Yates said she would look into this and by Monday morning had arranged this request. Later that day, she had been fired.

It took 18 days for the president to act on Flynn.  He publicly defended his National Security Adviser’s unprecedented contacts with Ambassador Sergei Kislyak and only fired Flynn when the Washington Post obtained leaked documents revealing Flynn’s flagrant violations, even though he knew Flynn had lied to the Vice President and FBI investigators two and a half weeks earlier.

During those 18 days, Flynn participated in a call with Vladimir Putin, a dinner with the Japanese PM, was involved in national security matters related to North Korea and put Iran “on notice” for new sanctions.

Senator Al Franken at today’s hearings had this to say:

“Maybe, just maybe, he didn’t get rid of a guy who lied to the vice president, who got paid by the Russians, who went on Russia Today, because there are other people in his administration who met secretly with the Russians and didn’t reveal it until later, until they were caught. That may be why it took him 18 days, until it became public, to get rid of Mike Flynn, who is a danger to this republic.”

Sitting next to Yates at the Senate hearing today, the former Director of National Intelligence, James Clapper sounded an alarm.

“If there has ever been a clarion call for vigilance and action against a threat to the very foundation of our democratic political system, this episode is it.”

Why did Trump say Sally Yates “betrayed” the US? How could he call her “weak on protecting our borders” when she was the one courageous enough to sound the alarm on a clear and present danger within his administration? How could he fail to act on this information until the Washington Post revealed it? And how long does it take for what he calls a “hoax” to turn into a cover-up? Not long, thanks to Sally Yates.

2 thoughts on “The Sally Effect”