59 Tomahawk missiles have been launched into Syria, fired off US Navy ships in the area. Their target was the Al-Sharyat airfield near the city of Homs. The cruise missiles strike follows a chemical-weapons attack launched by Bashar al-Assad’s government on civilians in Idlib, in Northern Syria, which claimed dozens of lives.

President Donald J. Trump says the chemical-weapons attack by the Syrian government was launched from the Al-Sharyat airbase targeted by the Tomahawk missiles. Both infrastructure and aircraft at the Syrian airbase were struck in the US attack.  Pentagon officials believe they have put the airbase ‘out of commission’.

This recent image (below) shows Russian aircraft supposedly stationed at the airbase. Pentagon insiders say Moscow was likely notified ahead of time of the US attack so it’s unclear if Russian troops were impacted by the attack. Russia and the US are working together to fight ISIS on the Western side of Syria. 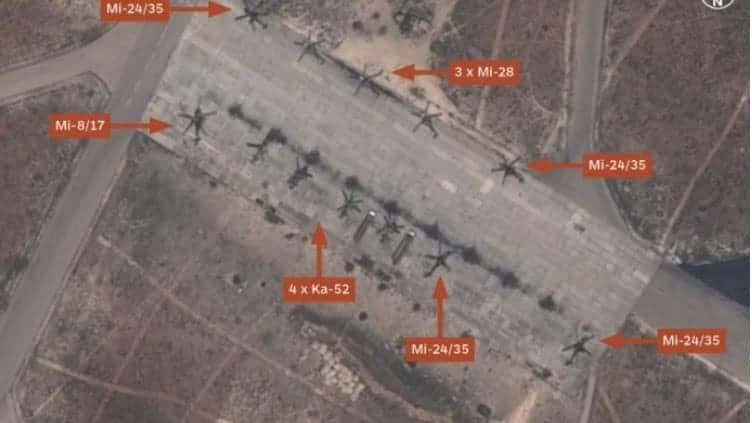 In a statement recorded at his Winter White House of Mar-a-Lago,  President Trump said the US launched “targeted military strike on the airfield in Syria from where the chemical attack was launched,” the President said. “It’s in the vital security interest of the US to deter the use of deadly chemical weapons.” He said he was calling on all “civilised nations” to stop the slaughter and bloodshed in Syria.

The Trump administration took the action just 72 hours to react to the chemical weapons attack. The Tomahawk cruise missile are viewed as an effective and proportional response to the Syrian civilian attack.  The Tomahawks which can carry 1,000-pound warhead have been used since the Persian war since 1991.  They can be launched from Navy destroyers up to 1,000 miles away, a tactical consideration when facing enemy air defenses. Tomahawks were last used by the Pentagon in October, when the military launched the missiles from the Red Sea at three coastal radar sites in Yemen after Houthi rebels there fired missiles at several U.S. ships over several days.

Trump’s order to strike the Syrian government targets come after the President said the chemical weapons attacks  — “crossed a lot of lines for me” and he felt a “responsibility” to respond.  This despite tweets in 2013, arguing that then President Barack Obama should not attack Syria in response to crossing a red line by using chemical weapons.