As FBI Director James Comey prepares to testify before the House Intelligence Committee tomorrow, one senator is pondering the question of impeachment. What’s at stake is much more than a presidency, it’s everything that happens afterwards.

“Back to the Future II” lived up to the tradition of almost every cinematic sequel ever produced (with the possible exceptions of “Godfather II” and “The Empire Strikes Back”).  There was little doubt about it at the time, “Future II” was a clunker. Critics panned it and fans struggled to relate to the dark parallel universe the movie inhabited. Unremarkable as it was then, 28 years later it’s providing an unwitting reference to the political landscape we find ourselves in today.

To my 17-year-old brain in 1989 , “Future II” could do no wrong. I obsessed over the possibilities of the plot. Imagine an inadvertent mistake by a pair of time travelers –  accidentally leaving behind an almanac containing the results of every major future sporting event – and in so doing, forever disrupting the entire course of history.

If you’re not familiar with the sequel, Michael J. Fox reprises his role of time-traveling Marty McFly. Only now, the idyllic “Hill Valley” of the original film has been overrun by greed and sleaze. McFly’s arch-nemesis Biff Tannen, has become an evil billionaire casino owner who made his fortune by placing bets based on the sports almanac accidentally left behind by McFly in the original “Back to the Future”. The whole things forces McFly and his time-traveling mentor, Dr. Emmett Brown, into their DeLorean hurtling back to the future “on a quest to repair the space-time continuum” without a second to spare.

If I’m reading the tea leaves correctly, by tomorrow we’ll be at the point in the Russian scandal, where things go from “did we leave the almanac behind?” to “Oh shit, we left the almanac behind”. What’s changed? Up until now, officials have only publicly linked Russia’s involvement in the US elections to the hacks of the DNC mail servers. But tomorrow, FBI Director Comey will be asked for the first time to publicly lay out Kremlin’s direct involvement with the President’s inner circle – leading up to Election Day and beyond. 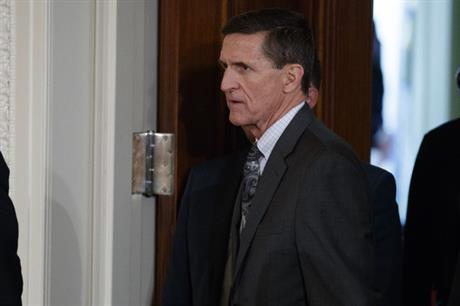 Over the last couple of weeks, we’ve watched the procedural build up to  Comey’s public testimony in front of the House Intelligence Committee. First, Trump’s former National Security Adviser Michael Flynn registered as a foreign agent, confessing to pocketing over half a million dollars for three months work as a consultant to the Kremlin’s mid-east ally, Turkey, all between September and November last year, during the final days of the election.

Now, it’s been revealed that Flynn was also paid $56,200 directly by Russia for various consulting and speaking gigs since 2015. Add to this, Flynn’s phone calls and text warnings to Russia’s Ambassador Sergei Kislyak about former President Obama’s imposition of sanctions and you can see a pattern of cooperation stretching for at least a year beginning December 2015.

And it’s not just Flynn, a myriad of contacts between Kislyak and senior Trump officials has been exposed and it’s becoming difficult to deny Moscow’s involvement with the Trump machine was more structural than it was coincidental. Nor can it be said it began or ended with the DNC hack. It likely continued all the way to the White House, maybe even to this day.

For his part, President Donald J. Trump has been gearing up a defense of sorts.  The media likes to cast Trump’s “wiretapping” allegations against Obama as the ranting tweets of an unhinged president but they are far from it. They are a smart counter-strategy to the onslaught of evidence about Trump’s Russia connections. The question the White House will continue to ask is how was all this evidence gathered? and was it done legally? It may not be enough to get them off the hook, but it muddies the moral high ground just enough to challenge the perception of who was in the wrong. Implied in the claims, if Obama could do this, what’s wrong with chumming up to Putin?

As to the meat of the wiretapping claims, it’s unlikely the FBI made a mistake when eavesdropping on Flynn, an American citizen. They probably did it lawfully, in the course of some sort of criminal investigation. Many in DC believe Flynn’s recent retroactive registration as a foreign agent, is as an indicator that he is lawyering up. Trump’s team will have to find something that sticks on the wiretapping claims, if their counter-strategy is to work.

Otherwise the decoy will only work so far. As Russia evidence mounts up, the situation may become untenable for the new administration. The new refrain will be “What did they know?” and “when did they know it?” According to the AP,  the Trump’s transition led by Vice President Mike Pence, was  aware of Flynn’s dual loyalties for weeks, if not months. “Trump’s transition team learned before the inauguration that Flynn might register with the government as a foreign agent,” the AP says. If that’s true, what does it say about their comfort with Russia, that they still appointed him National Security Adviser?

The FBI’s information could be even more damning than is publicly known, or will be revealed tomorrow. Republican Senator Chuck Grassley and Democrat Senator Dianne Feinstein looked so shaken on TV after they received a closed-door top-secret briefing from Comey on Wednesday, the disclosures must have been really jarring to illicit this reaction from two seasoned pros.

Feinstein let slip the severity at an LA fundraiser on Friday. A protester asked Feinstein “how do we get Trump out?”. The usually tight-lipped senator responded to the question about ousting the sitting president: “I think he is going to get himself out.” On another question of whether Trump had committed impeachable offenses, Feinstein replied “I can’t answer that right now”. Feinstein does not use her words lightly, she’s mulling the “I”-word, she’s just not ready to say so publicly.

And so tomorrow, the drip, drip, drip of leaks will finally become a verified public briefing. It will no longer be possible to hide behind the unofficial conjecture of leak-based reporting. The United States has three distinct branches of government for exactly this type of scenario. It will be Congress who needs to get to the bottom of this. They are our Marty McFly and Dr.Emmet Brown, faced with an almost impossible and thankless task for the sake of nothing more than the sanctity of the Republic.

It doesn’t have to end in impeachment, the real goal is this: can we sever or reverse  Russia’s connections to the White House? How do we ensure Moscow stops doing it? Does the US have an effective enough counter-strategy? And how do we undo the damage already caused in the last few months while Vladimir Putin has been exercising his new global power in the vacuum left by the US turmoil.

As McFly and Brown found out in “Future II”, the space time continuum is a fragile thing and the window of opportunity to act is brief. Every day, the status quo continues, events happen that make them harder to reverse. We may not have a DeLoreon time machine at our disposal, but the US has truth and justice on its side, and a few good men and women in the House and Senate. That may be just enough to get us back to our rightful future.

One thought on “The Russia Scandal Is About To Get Much Bigger.”